How To Integrate Cucumber With Jenkins? 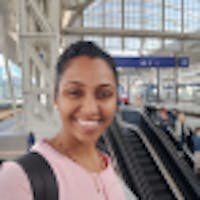 Cucumber is an open-source BDD (Behavior-Driven Development) testing tool for automation testing of web applications. It remains to be one of the best frameworks for functional and acceptance testing. This is because of its widespread adoption in the open-source community, enhanced natural language support, and the ability to support new programming languages quickly. Almost all organizations that use Selenium prefer to integrate Selenium with Cucumber since Cucumber makes it easy to read and understand the application flow. To schedule test case executions remotely, we can also go for Cucumber with Jenkins integration and utilize the immense benefits of Jenkins.

Getting Started with Cucumber Jenkins Setup

Cucumber is well-known for agile development of web applications and reporting the results. With an easy-to-understand language, powerful plugins, and a straightforward integration with Selenium, starting Cucumber with Jenkins integration has never been easier.

Before we begin, let’s understand why you need Cucumber with Jenkins integration in the first place. Here’s why- Cucumber acts as a bridge between:

And as you already know, Jenkins is an open-source, accessible, easy to use CI/CD tool. With Jenkins, you can schedule a run on scheduled time or trigger builds after an event, and it also comes with a plethora of plugins. You can refer to our comprehensive Jenkins tutorial to learn more about this tool.

Now, let us see how to integrate Cucumber with Jenkins.

Prerequisites for Cucumber with Jenkins Integration

This plugin takes Cucumber JSON output as input and publishes the results in polychrome. The results will appear in GREEN when they have passed and RED when they fail.

Here’s how to install the Cucumber Test Results plugin. You can also refer to our blog on generating TestNG reports in Jenkins for more information.

To execute, click the “ Build Now ” button from the left menu for the job. The build should be successful. Instead of watching console output, select “ Cucumber Test Result ” at the end of the build. 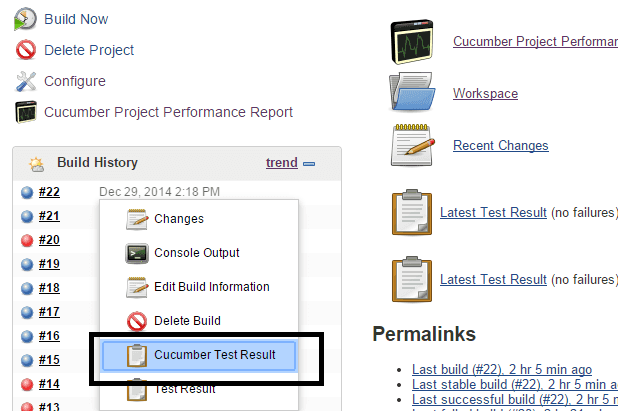 Next, go to Feature –> Scenario , where you can see all the steps’ status. As shown below, they are all GREEN. 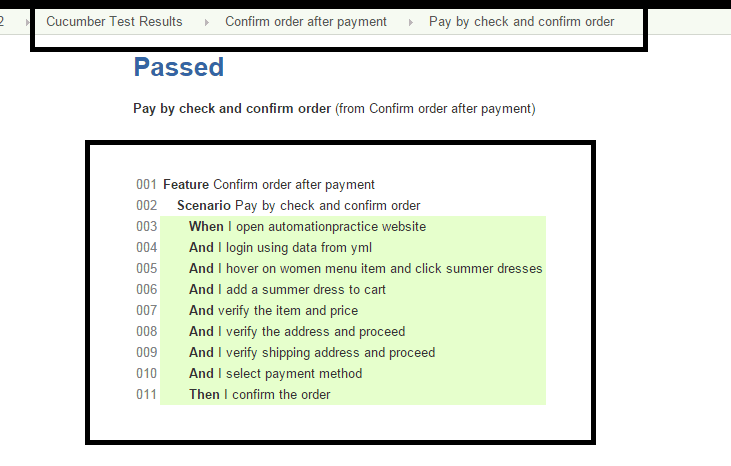 Cucumber Reports plugin can read the JSON output and produce pie charts for feature or scenario results & bar graphs for tags. This is possible if we had options “-f json -out cucumber.json,” where you output the results to JSON format, i.e., in cucumber.yml. This plugin has advanced options to help us make vital decisions on the test results. 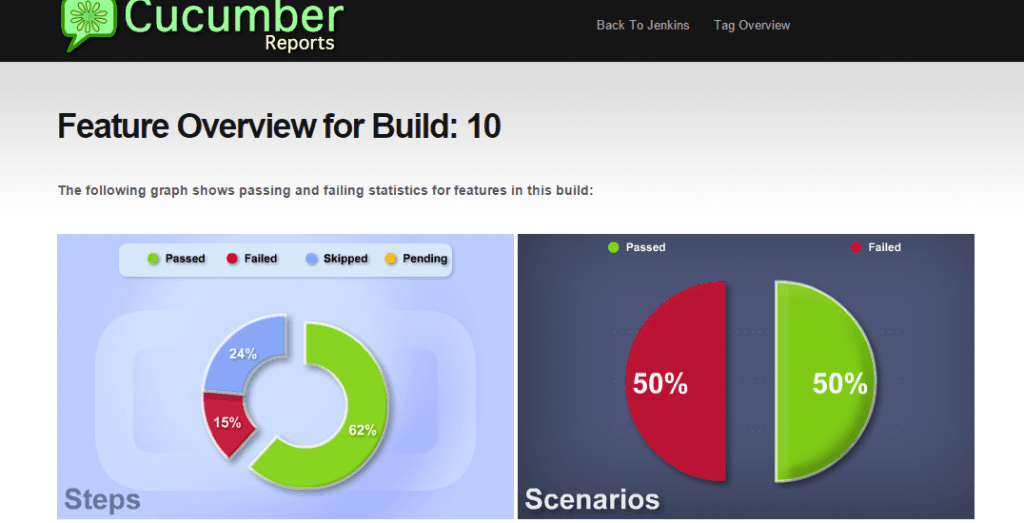 We get results as below.

This plugin helps us demonstrate the history of how Cucumber results were performing as a trend. This is helpful when you keep running the suite multiple times.

There are additional features to it, like “ worst-performing features ” over time. This mainly helps us focus on those bottlenecks and allows us to debug them further. 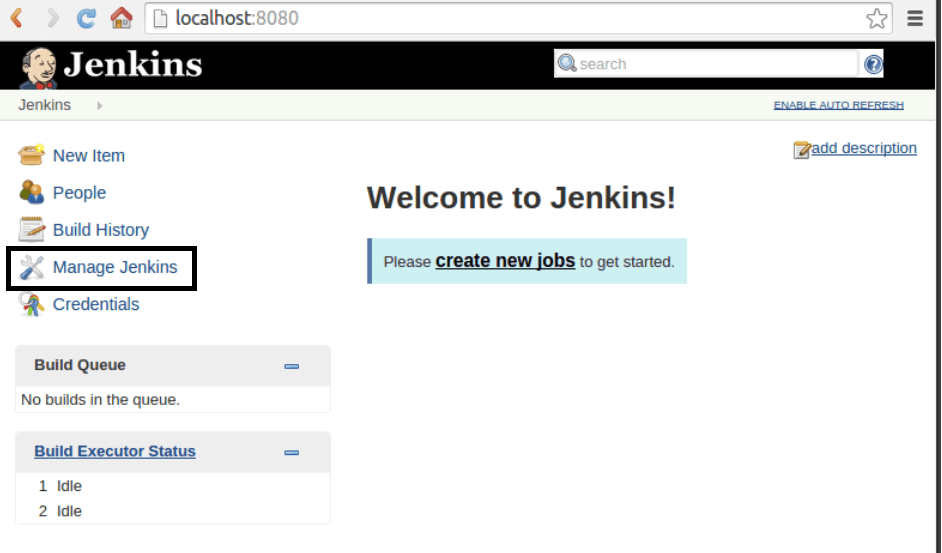 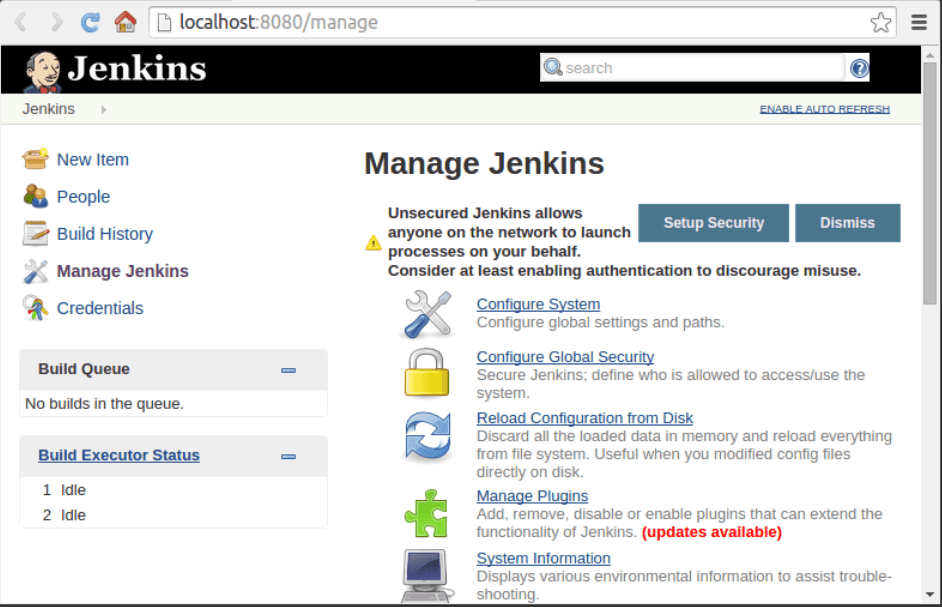 Make sure while installing these plugins, all the dependent plugins are also successfully installed. This is to ensure the plugins work as expected without glitches. 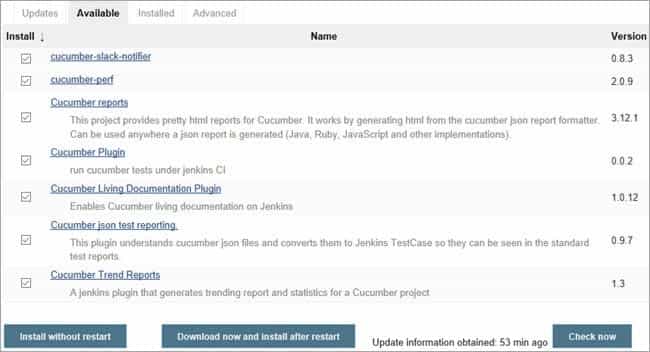 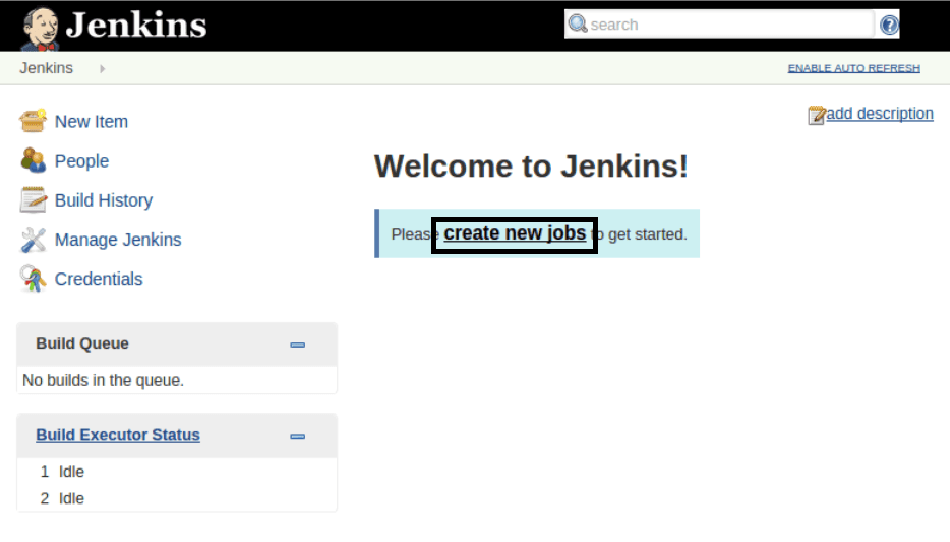 Hurray, you have successfully completed Cucumber with Jenkins integration! Before we proceed further, this might be the right time to acquaint yourself with the best Cucumber practices.

Automation scripts built with the Cucumber framework benefit from being easy to understand, easy to communicate, and good maintenance, so it is popular among test automation teams. An essential aspect of integrating DevOps is incorporating automated testing into a continuous integration (CI) process.

Now that you have completed the Cucumber Jenkins setup, in this section, we will see how to configure Jenkins to run an automated Cucumber test script and show the Jenkins UI report. This can be done using the following methods-

To illustrate the Cucumber Command Line, we use Cucumber.js. Many who already know this tool know that it means running the “Cucumber-js” command directly in the directory of the automation script. Or if you don’t have Cucumber installed globally, run “node modules/.bin/cucumber-js” (or, if you’re on Windows, the .cmd extension), and the Cucumber installed locally will be used. After execution, the output of the text on the command line is written. You can refer to our Cucumber.js tutorial for more information.

The command line is identical if you are running it as a job under Jenkins. Just add the “format” parameter, indicating the output file in the “JSON” format, to make Jenkins render a visual report. The following is the command line:

A report is output to report.json, and then this file is used by the Jenkins job to view the report.

The benefit of using CukeTest is that with each project, you don’t have to install Cucumber.js. CukeTest already has Cucumber.js built-in, which saves your storage space and time. Another advantage is that it can run Windows automation with the library built-in, capture video, etc.

Below are the command lines for various platforms-

For the demo, the source code is kept in github.com/CnodejsTest. This project is used to automate test cnodejs.org community site. Alternatively, we can use our Cucumber project to configure and run the job. 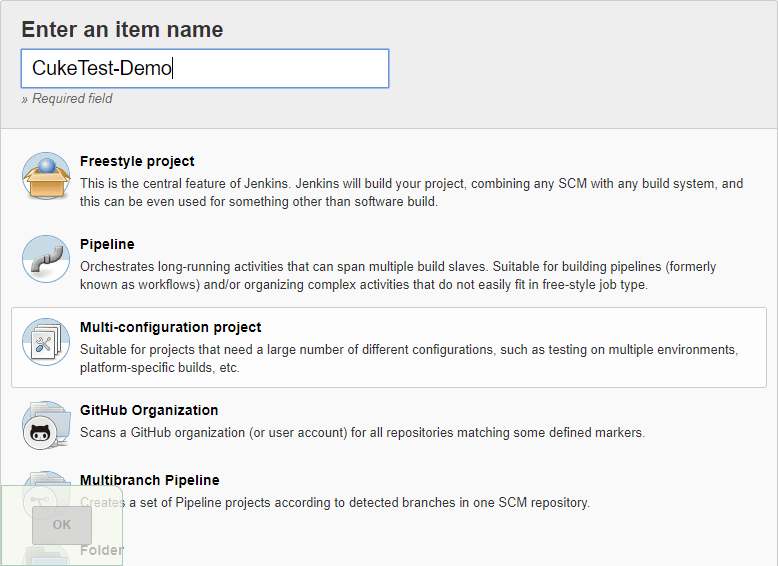 The ‘ npm install ’ command installs npm dependency packages that are consumed by the automation script. 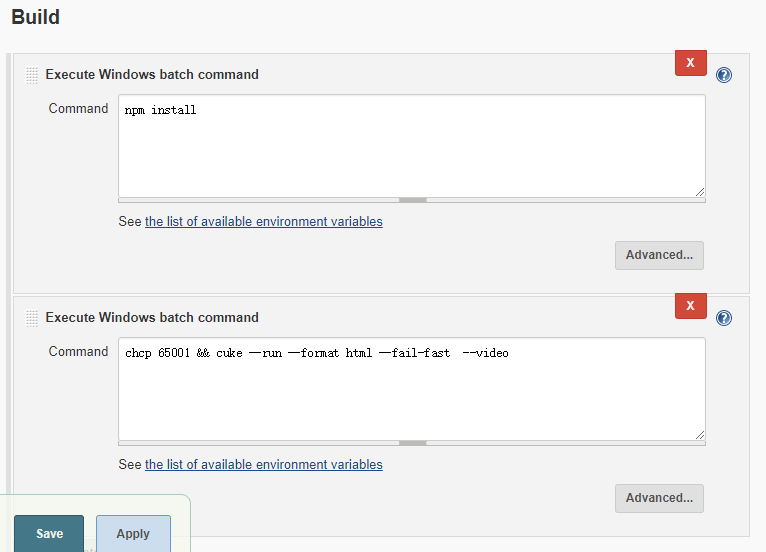 You can observe the execution progress upon build now of the job in the build history.

We can also find the running job log under the Build History. At the exact moment, the report file is also generated in the Jenkins Workspace directory.

In Jenkins, we can use the Cucumber reports plugin to show the report. We have already seen the introduction to this plugin in the Cucumber Jenkins setup above. Additionally, you can also read the information about this Plugin available at the official Jenkins website:

The following are the steps to configure Jenkins to generate reports.

We need to restart Jenkins after the installation of this plugin.

We need JSON log data files to generate reports because the Cucumber reports Plugin generates reports by parsing the JSON report file created by Cucumber or CukeTest. Therefore, it is necessary that we first configure a running project which will create JSON log data files.

In the run configuration file, we have to select “ JSON ” in the report format. 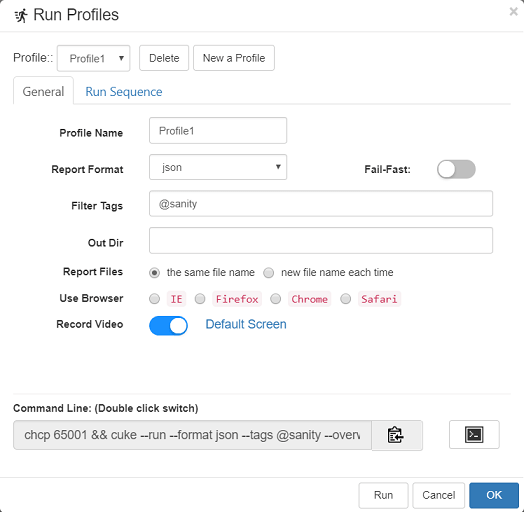 When we would run this command, the command line execution output is changed to json. 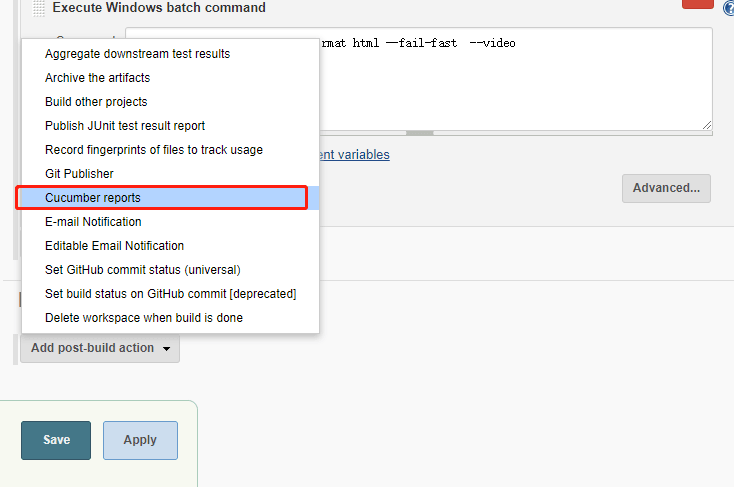 Go to the ‘ Advanced ’ option under the ‘ Cucumber reports.’ In the ‘JSON Reports Path,’ enter “reports.” 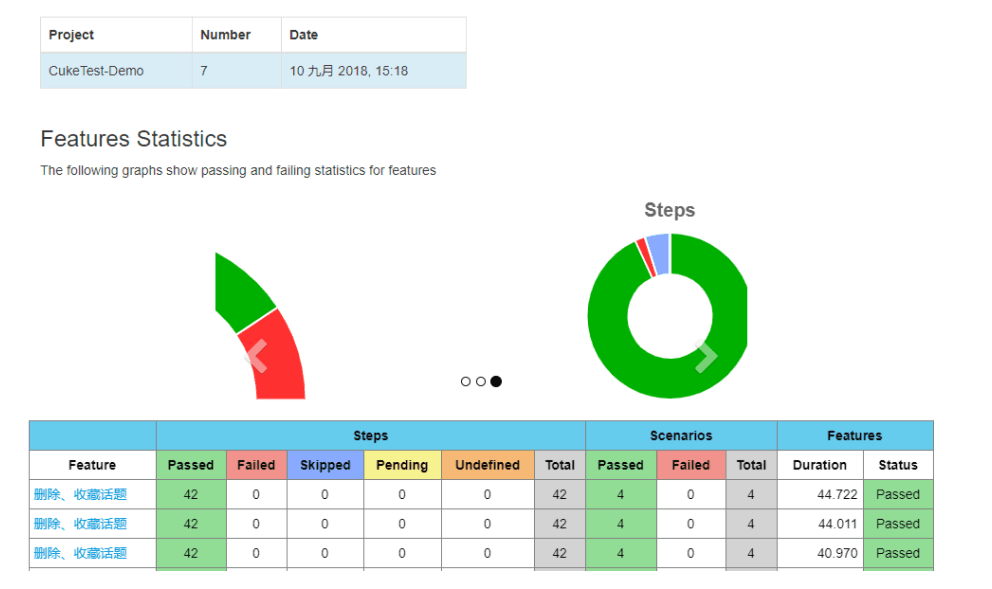 So till now, what we have seen is how to integrate Cucumber with Jenkins and how to run a Cucumber script on Jenkins along with the generation of graphical reports.

It is also possible to leverage cloud-based platforms’ automation capability to make remote testing more seamless than ever. You can configure your Cucumber scripts to run on LambdaTest’s Selenium Grid cloud and perform testing on 2000+ browsers, devices & operating systems. In the next section, we will learn how you can make the most of Cucumber with Jenkins integration & LambdaTest.

Below we would see how we can get our Cucumber scripts running on the LambdaTest platform, and further, we can use the same steps as defined above to integrate Jenkins to generate the reports.

Few prerequisites before we start running the scripts:

After we have the environment setup aligned, perform the below steps to run the Cucumber scripts.
Make sure we have our repository cloned from Git.

Both the commands validate the test cases and execute the test suite across all the defined test groups. We can check the test results by opening the LambdaTest platform and navigating to the Automation dashboard.

The below sample snippet depicts the same.

This blog presents how a Cucumber with Jenkins integration can help run automation scripts successfully. Additionally, this Cucumber with Jenkins integration can also be leveraged to run scripts over the LambdaTest cloud platform. The best part is that project stakeholders can all read the test reports after the Cucumber Jenkins setup and understand the quality status. Jenkins also has many other features, such as setting up timed service, sending mail, and other functions. You can configure to further customize report notification according to project needs, such as sending HTML reports to key stakeholders as an email.

Do leave your comments if you found this blog helpful. If you have any questions or doubts, you can always shoot up your query on LambdaTest Community and get it resolved!